How “Work from Anywhere” Will Reshape the World

Effects of the Anywhere Economy are bigger than you think

Slack CEO Stewart Butterfield likes to offer the following thought experiment. What if, back in March 2020, instead of giving up our offices and relying on software to keep business running, we had done the opposite—kept our offices, but lost our software? “We’d all go out of business. Every organization would disintegrate in 24 hours. They would cease to exist,” Butterfield says.

His point is that the workplace has been flipped upside down: digital used to supplement physical, but now physical is the supplement to digital. Slack isn’t giving up in-person work completely. But Butterfield says most work will be done in digital forums. Slack calls this model “digital-first.” At DocuSign we see remote work as part of a larger shift to what we call the “Anywhere Economy,” a world where work, trade, commerce and agreements become untethered from physical location.

As Butterfield tells it, early on during the pandemic lockdown, he and his team wondered when things would go back to the way they were in February 2020. (As most of us did.) But then they realized that things were never going back, that there was now a “new normal.” Instead of trying to return to the past, Butterfield and his team started building a new way of working in the future.

Most of the world is going with them. Yelp is shutting down offices and shifting completely to remote work. Airbnb says its employees can work from anywhere. Even JPMorgan Chase, which once insisted everyone return to the office, caved in and will let half of its employees work remotely.

The change is driven in part by employee demand. Lawmakers in the Netherlands are even considering making remote work a legal right. But companies also recognize the benefits they can reap.

What impact will remote work have on overall corporate performance? It’s not yet clear, but having workers who are happier, more productive, more engaged, and less likely to leave for a different job, plus being able to save money on office space, seems like a recipe for improving the bottom line.

And that’s not even the good part. All those things, as wonderful as they are, pale in comparison to the ultimate potential impact of remote work—which is the role it plays in bringing about the Anywhere Economy.

Venture capitalist Marc Andreessen, co-founder of Andreessen Horowitz, believes we’re on the cusp of a “permanent civilizational shift” that “is perhaps the most important thing that’s happened in my lifetime, a consequence of the internet that’s maybe more important than the internet.” (He lays out his case in an essay titled, “Technology Saves the World.”)

Now that people no longer need to live where they work, Andreessen says we can smash the “geographic lottery,” in which people who weren’t born in the right place have been deprived of opportunities. “Permanently divorcing physical location from economic opportunity gives us a real shot at radically expanding the number of good jobs in the world while also dramatically improving quality of life for millions, or billions, of people,” he declares.

The geographic lottery created an economy in which good jobs were clustered around big cities, and wealth accumulated disproportionately in a few locations, like the San Francisco Bay Area. In the emerging Anywhere Economy, wealth may be distributed more evenly around the world.

People who get “anywhere jobs” will spend money where they live, lifting up their communities. These prosperous communities may become customers for goods and services sold by the companies that shifted to a “work from anywhere” model in the first place.

For just one example, think about Slack letting its employees scatter around the globe. Those Slack employees will create new jobs and new businesses—and those companies will use Slack.

It’s a virtuous circle: companies that adopt “work from anywhere” policies might be creating new markets for their products.

Just over a century ago, Henry Ford started paying his assembly line workers $5 a day—a lot of money at the time—so they could afford to buy the cars they were building. The shift to “work from anywhere” and “recruit from anywhere” has the potential to do that on a global scale.

At first glance, working from anywhere appears to be about working from home in your sweatpants; or moving to Bozeman while keeping your engineering job in Silicon Valley; or becoming a digital nomad, bouncing from one country to another.

But the real impact of working from anywhere is going to be way, way bigger than that. 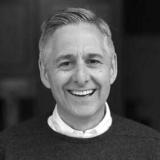